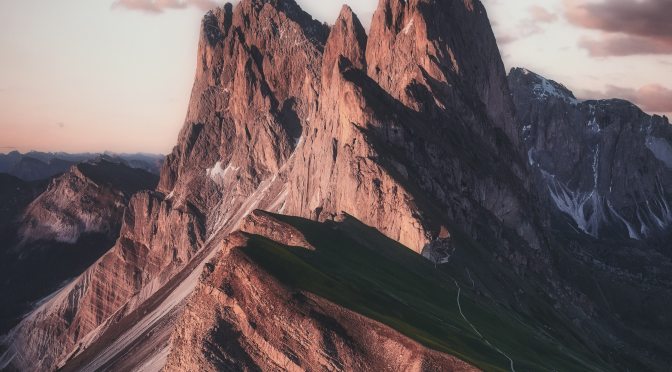 They told the man, “It can’t be done.” Climbing the mountain would be difficult, and there were giant obstacles standing in the way. “It can’t be done,” they continually repeated. Sound familiar?

There are barriers in life that seem like mountains. The goal is huge, the dream is enormous, and the calling seems impossible. We believe we know our purpose, but fulfilling it is overwhelming. So, we become disheartened. If this is you, the Bible offers encouragement.

Caleb was able to overcome a mountain.

The Bible records the story of Caleb. He faced much adversity on his path to fulfilling his purpose. Caleb kept hearing the phrase “it can’t be done,” but he was able to overcome the barriers thought to be disabling.

Caleb was among the 12 spies who explored the land promised to Israel. Most of the spies came back with an unfavorable report. They did not believe it was possible to take possession of the land. They said, “It can’t be done.”

This is a disheartening statement.

“It can’t be done” is a short statement but has the power to demoralize the recipient. It did in Israel’s day; they heard the words causing panic and a lack of faith. Unfortunately, the same happens today.

We take steps to fulfill our purpose, and we are met with resistance; “it can’t be done,” we are told. Odds are we won’t be successful because of our background, socioeconomic status, or we have a disability. Society creates a stereotype deeming you and me unsuccessful, so we are instantly told, “it can’t be done.”

Hearing this phrase is discouraging. Our desire is to overcome barriers and fulfill our purpose, yet attempts are cut short by a few words. In turn, placing another barrier on the path. Caleb shows us how to respond when this occurs. He responded to the statement with faith.

Caleb was able to overcome the statement.

Caleb responded to the “can’t” statement with faith.

“If the Lord is pleased with us, he will let us into that land, a land flowing with milk and honey, and will give it to us,” Caleb says in Numbers 14:8.

Caleb remembered the Lord had already helped Israel, and he knew the Lord would help them again. Caleb had faith, which is the most important key to be an overcomer.

Caleb had a proper understanding of his own abilities. He understood his own capabilities and limits. We too need to have a proper self-image. We have limits, and it’s in our weaknesses God does some amazing work.

Caleb’s faith propelled him past doubt to knowing the Lord would help Israel accomplish the purpose.

His faith allowed him to take a mountain.

Caleb remained faithful as life continued. Israel had to stay in the desert 40 years because of their disbelief. Caleb continued living the life of an overcomer, and when he was 85 years old, Israel had taken possession of the land, and there was a mountain needing conquered.

This was no ordinary mountain. Its inhabitants were giants. Caleb faced some barriers in taking this portion of land, but he believed he could. Again, Caleb’s faith propelled him past doubt to knowing the Lord would help him.

Caleb was not someone satisfied with the average or commonplace. His goals and dreams were big. His purpose was important, and his faith was strong. There were barriers standing between Caleb and fulfilling his purpose, but Caleb’s faith helped him overcome the barriers.

Our faith needs to propel us past doubting to knowing.

Our goals and dreams are big. Our purpose is important, so we need our faith to be strong. There will be barriers standing in our way. Some may seem as large as a mountain occupied by giants, but we can overcome them. The Lord will be with us as we accomplish the purpose, he has given us. Like Caleb, our faith needs to propel us past doubting to knowing the Lord will help us.

Faith is like muscle. The more it is used, the more it builds. Build up your faith by taking steps to accomplish your purpose. Identify one or two steps you can take in the next week, and in faith, take them. See what happens.

What are you looking for?